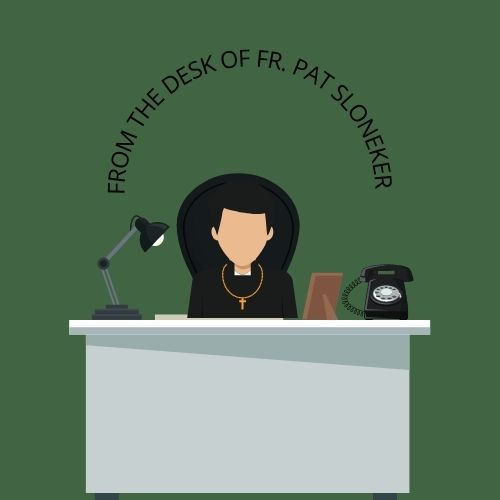 History Maker
Last Sunday’s 5 PM Mass, held inside church due to a high percentage chance of rain, was the second most crowded 5PM Mass since we began that Mass a year ago! The most crowded was the outdoor Mass a month ago. As a part of the Strategic Plan goal to be more welcoming and to unite even more participants of our major ministries (PREP and School) to church, we tapped into one of our most valuable resources: the creativity of Incarnation School leaders. Since the Mass was being offered on the first Sunday of October, during Munich’s and Minister, Ohio’s Oktoberfest’s, that was the chosen theme.
Thanks especially to the creativity of Principal, Leah Coghlan, School Marketing Director, Laura Senkiw, and Director of Music and Liturgy, Kevin Samblanet. The Oktoberfest theme was highlighted with beer, root beer that is, donated by Nick Bowman and his staff at Warped Wing Brewing along with a bargain-hot-dog-box-supper by Jim Powers and his staff at W.G. Grinders, who also serve Incarnation’s daily school lunches! Thanks to all who participated in another history maker!

Duly Impressed and Aptly Inspired
Among the many changes we have made at Incarnation over the past months to better serve Jesus and his people here is “upping our altar server game.” I have mentioned this several times in thanking Fr. Ignatius and Deacon Roger for training servers so well and in the large amount of organizational time it takes Fr. Ignatius to put together schedules. Not only do we have servers scheduled for Sunday Masses, but we also have them scheduled for most 8:30 weekday Masses.
I think I have also mentioned how exacting and poised our altar servers are and how much their presence and ministry add to the Mass. However, last weekend it hit me how inspiring their devotion to Jesus is.
Before Mass I noted the two girls who were serving and thanked them for being there. Next morning I had to do a double take. Willow Wakefield, who served the night before, was serving the 7:30 AM Mass too!! How inspiring!! From what I hear from the average parent, most children are not exactly bouncing off the walls to go to church, school, or family events. Yet, here was a young gal enthusiastically attending Sunday Mass, not once but twice a weekend! Thanks Willow and special thanks to her parents!

Beautification Award Received
One last thanks to our many wonderful gardeners as the season draws to a close. This past Monday, Kathy Antonelli and I attended the Washington Township Trustee meeting to receive one of about eight beautification awards given by the township to homeowners and businesses recognized for particularly beautiful properties. See the award in the vestibule of church and thanks to nearly twenty parishioners who newly volunteered on stewardship cards to help with grounds beautification!!

Parish Communications and Social Media
Thanks to all parishioners who are registering for Flocknote. This will be a tool used to send a weekly newsletter, which will include the bulletin. It will also allow staff members to connect with parishioners in special groups, such as youth ministry, in an approved, secure and safe platform. Its final use will be to send urgent communications occasionally. Flocknote will not replace our parish app. For those who miss the app, please email the pastoral council email or talk to a pastoral council person to tell them what you miss most. Since St. Francis recently began to use an FSG app similar to our parish app and since we are united with them in Beacons of light, it is possible we could bring back that familiar platform. We also might go to a different app.

Christmas Kindness
Santa and his elves prepare all year for Christmas. In the same way, even though it might seem early, leaders of Christmas Kindness
asked that we start the ball rolling. Please see the important information below regarding this outstanding Incarnation Church outreach.

Sincerely and with Love in Christ,